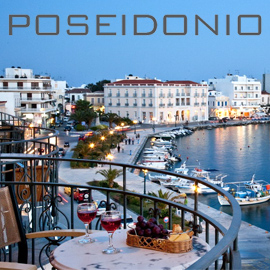 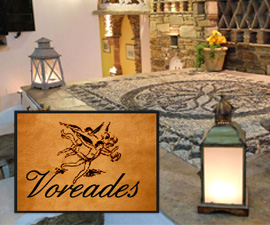 The capital, the port and center of Tinos. At the first image, as we approach the port, Panagia Evangelistria stands on the hilltop, with its impressive architecture and the tall bell tower. Polymerio is the jewel of the port, a neoclassical building housing the Cultural Foundation of Tinos. At first glance the coastal part of Chora does not resemble traditional Cycladic Island, however alleyways are leading to traditional neighborhoods with courtyards and little churches, offering a rich atmosphere of traditional Cyclades. It boasts the district of Pallada, where besides the mansions are also nice restaurants, bars, clubs and shops. Around there, in a small square you will come upon a pelican, the square hallmark. One of the most classic walks is to ascend Evangelistrias street, the pedestrian street that starts from the port and ends at Panagia Evangelistria.You will find shops, patisseries with traditional almond sweets, items for pilgrims as well as cafes and restaurants, both along the walkway, and on the small alleys. In Panagia Evangelistria you can visit the museums housed on its premises. Another main road leads to Panagia Evangelistria, the Megalocharis Street, where on August 15th people gather on her grace. Your eye can not fail to see the carpet along the entire street, for believers, who as a vow to Panagia go from the boat to the temple on their knees. The days around the 15th of August, Chora is changing face because of the thousands of pilgrims, while the festive atmosphere is definitely special.
The seaside promenade is one of the most refreshing. All the coastal part of Chora has restaurants, cafes and shops overlooking the sea, the fishing boats and the ships. On summer evenings it turns into a pedestrian street making the walk more enjoyable. You can walk to the tarsanas (small shipyard at the edge of the port, common to almost all Greek islands) for coffee or lunch, and if you like walking, shortly after, you arrive in the Agali area and from there to Agios Fokas beach. On your walks in Chora you will find the Archaeological Museum, which is definitely worth a visit to admire the marble solar clock of Andronikos and the large, embossed jars.